Although Tesco was the most visited supermarket by those surveyed in the latest research from PRWeek/OnePoll, respondents believed other supermarkets had a better reputation.

Last week, the market leader unveiled a £1bn plan to overhaul its stores after announcing its first fall in UK profits in 20 years.

The plan appears to be timely for UK consumers. Of the respondents, most shopped in Tesco (34 per cent) and thought it had the best product range (30 per cent). But other supermarkets had a better reputation on every other measure: Asda offered the most reasonably priced goods (43 per cent); Waitrose offered the highest quality goods (38 per cent); Sainsbury's had the best customer service (21 per cent); and the Co-op operated in the most ethical way (27 per cent). Overall, respondents thought Waitrose (24 per cent) had the best reputation, just ahead of Sainsbury's. These perceptions remained unchanged since PRWeek asked the same questions in January 2011.

But while customer service and quality goods were important, it was price and convenience that remained the biggest factors for respondents when choosing where to shop. Price was the most important factor for every age group, particularly for the 18- to 24-year-old group, where 50 per cent were concerned with price, while only 14 per cent said convenience was the main factor.

In contrast, 33 per cent of those aged over 55 said they were concerned about price, but 28 per cent said convenience was their primary consideration.

Those surveyed said that price equates to value, with 'reasonable prices' and 'value for money' tracking at similar levels.

But retailers' sales data told a different story. Tesco was down, while Sainsbury's and Waitrose were flourishing, both of which offered value in price but in product and service too.

Asda maintained its strong price perception, but with all the big players delivering price promises, the space for true differentiation lies with product and service. It is what people are looking for. That is why 75 per cent still went in-store to shop, because they wanted to see the quality of the food they were buying and be treated well as they shopped.

The result was Waitrose and Sainsbury's lead significantly on best reputation and could be why Tesco had seen a fall in profits for the first time in 20 years.

So, as Tesco considers its new strategy, investing in stores and staff are important, but focusing on the quality of its food may be a wise move.

77% of respondents thought supermarkets took trade away from independent retailers 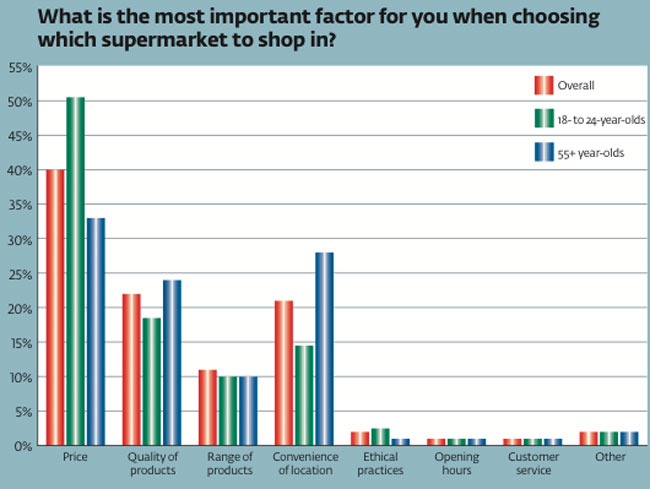