Employee engagement has never been viewed as a particularly glamorous part of the comms industry. Staff are often sidelined as an HR concern, in favour of customers, investors or the media. But while the business benefits of an engaged workforce are no secret (higher productivity and lower recruitment costs), employees are finally being recognised as an increasingly important driver of their employer's external reputation.

Not only are they a relatively cost-effective way to disseminate messages about a company, either through an ambassador programme or more traditional word of mouth routes, they can be a firm's most dangerous critics. Perhaps it is time to treat them with the same respect as external audiences.

'I trust a regular employee more than a CEO'

In Edelman's latest Trust Barometer, a global survey of more than 30,000 people, the credibility of CEOs dropped by 12 points to 38 per cent compared with last year. Meanwhile, regular employees saw the greatest increase in their credibility since 2004, from 34 per cent to 50 per cent. What this suggests is that people are more likely to believe what a regular employee says about their company than what the CEO says.

A closer look at Edelman's figures reveals that people with whom respondents identified ('people like me') were also seen as increasingly credible, jumping from 43 per cent to 65 per cent.

These findings reflect the difficult economic times when there is widespread anger over executive pay and corporations dodging tax. The Budget, which sparked 'pastygate' and the 'granny tax' moniker, also helped reinforce perceptions of a widening gap between the 'haves' and the 'have nots'. This 'us and them' notion may create greater solidarity between regular employees of different firms, and arguably makes them a better vehicle through which to deliver messages.

Some firms have already cottoned on to this, particularly retail organisations whose staff act as daily brand ambassadors to their customers.

McDonald's, for example, has been running ambassador programmes for its staff since 2006, and has put much effort into changing the perception of a 'McJob'.

As Southern Railway's internal comms manager Jo Loerns says: 'Our people at our stations and on our trains are the face of Southern to our passengers, so they are vital to our external reputation. It is important that they understand and are engaged with what we want to achieve as a business.'

PR agencies including Edelman and Open Road claim to have seen an increase in new work in the employee engagement sector in the past 12 months. But Nick Howard, director of employee engagement at Edelman, argues: 'Many firms still have not realised they have a potential army of advocates or alternatively, an army of critics and detractors who will inevitably get more airtime.' To appreciate the damage an employee could cause, companies need only look at the negative Goldman Sachs headlines in March. One of the investment bank's executive directors, Greg Smith, quit after 12 years and penned an open letter in the New York Times, claiming staff referred to clients as 'muppets' and ripped them off for as much money as possible.

In the current landscape, where goodwill towards banks and financial institutions is low, the story resonated with a large audience. Crucially, it had an impact on the firm's bottom line. Shares dropped by 3.4 per cent (£1.3bn) overnight, and it is too soon to tell the damage it may have done to its longer-term recruitment or client retention.

Bitter ex-employees are not a new phenomenon, but Edelman's research suggests they are more likely to be listened to and seen as more credible than in the past. Employees are also perhaps less likely to be loyal to their former employer. Open Road's CEO Graham McMillan says: 'Previously, virtually no ex-employee of Goldman Sachs had broken the "omerta" (mafia code of silence). That's one of the reasons his comments got a lot of coverage.'

These messages can also spread quickly, and widely, on social networks. 'Research frequently shows that corporate reputation is based on two things - the quality of the product or service, and how the company treats its employees,' he adds.

Companies need to recognise that their employees play other roles in their communities.

'If you are a large organisation, there will be people within your workforce who camped outside St Paul's Cathedral for Occupy London or took part in the Arab Spring, or at least sympathise with these causes. There's no distinction between these groups,' says Howard.

In Edelman's research, the opinion of regular employees was seen to be as credible as that of NGOs.

'A few years ago, companies would talk about the value of their contribution to society in hard monetary terms, for example, the amount of volunteering time they had provided. That kind of CSR activity is now a hygiene factor, people expect it. What they want to know is how a company operates beyond its CSR report. How do they treat their employees? How do they do business?' says Howard.

One factor driving this expectation is the new generation of employees flooding the workplace. While Generation X was said to want a good career and financial reward, the Millennials are demanding ethical and socially responsible employers. Howard says employers need to explain to these new workers the company's vision, the part it plays in the wider world and how they are a part of that.

'They want to feel part of a worthwhile endeavour and that they are contributing to something bigger than a balance sheet,' he says.

Making sure employees are engaged with a company does not necessarily require huge monetary investment, but it does require a commitment to doing things differently. The top-down information service approach is outdated. Companies need to be prepared to listen to staff and create a more collaborative environment. This starts with asking employees how they want to be communicated with.

'At Southern, we have placed a lot of emphasis on improving the manager-employee relationship so that our people feel they can ask their manager questions about why we have made certain decisions and do what we do, and know that they will get an honest answer,' says Loerns.

McMillan believes there is untapped potential to use social media techniques internally - note, for example, the rise of services such as Yammer and other closed-shop social networking tools over which businesses have more control.

As well as breaking down traditional silos and hierarchies, it can be a positive environment for crowd sourcing ideas, connecting staff, problem solving and creating product innovations or improvements.

Those companies with an engaged workforce are set to reap the rewards.

EDELMAN TRUST BAROMETER 2012 - PUBLIC OPINION ON WHO TO TRUST

If you heard information about a company from one of these people, how credible would that information be?

This question was answered by 5,600 people from 20 countries in the 'informed publics' group.

The 2012 Edelman Trust Barometer measures attitudes about the state of trust in business, government, NGOs and media across 25 countries.

This was the 12th year the survey had been conducted. It was produced by research firm StrategyOne and consisted of 20-minute online interviews conducted from 10 October to 30 November 2011. 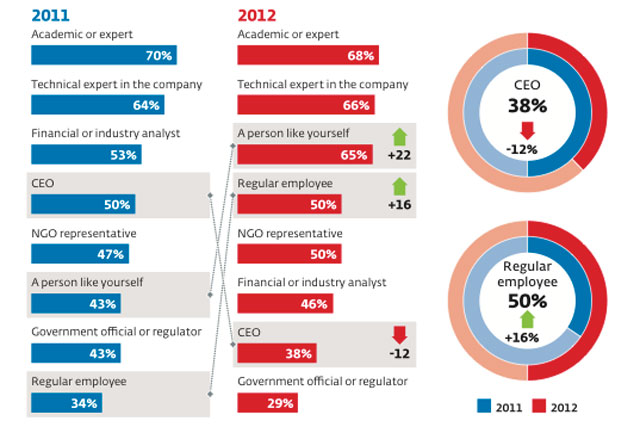 'Employees have become increasingly important for a firm's reputation.

At O2, we are all responsible for the brand. We are very clear that our people are our brand. Internal satisfaction scores are taken just as seriously as those for customer satisfaction. We believe happy and engaged people generate happy customers.

We like to offer our people choice in how they get involved across our business, or even just in team conversations, debates and forums. This has developed significantly in the past 12 to 18 months.

We use social media for debate, ideas sharing and recognition, but we still like regular face-to-face forums. Our UK board is out talking with staff at sites and in stores every month.

We also have all the internal comms channels you would expect a company such as ours to have: a lively intranet with a very active news and blogs hub, email (we try hard not to use that too much) and team briefings, plus our own monthly TV show, a podcast site our people can access on the move on their smartphones and a newspaper for our retail people.

Every day across O2 thousands of people comment and share their views and how they feel about things. They use our social media forum, comment on blogs or post their own. They tell our top team their ideas, what they like and what they don't like, and how our customers are feeling. We welcome feedback and change processes where we can, and explain why not when we can't. Anyone in our business can access and talk to anyone.'

Does your role require you to seek innovative ways to engage your employees? Learn how to empower employees and put them at the heart of your organisation at PRWeek's Strategic Internal Communications conference in November. Click here to find out more