Men are more critical than women of UK lobbying practices, while anti-lobbying sentiment tends to increase with age.

A PRWeek/OnePoll survey, timed to coincide with the end of the consultation on the Government's proposed statutory lobbying register, shows that while 37 per cent of men believe that lobbying 'does more harm than good to British democracy', only 28 per cent of women feel the same.

Press coverage of lobbying scandals, all of which predominantly featured middle-aged men, has increased in recent months. Many more men said they understood what lobbying was than women (54 per cent versus 35 per cent), and were more strongly opposed to whether people should be able to pay for advice on engaging with government (43 per cent, as opposed to 38 per cent). More men also thought the fault in lobbying scandals lay mainly with politicians (54 per cent, as opposed to 46 per cent).

Age appears to increase strength of feeling, with 39 per cent of respondents aged 55+ 'agreeing strongly' that lobbying needs to be regulated more tightly, compared with 25 per cent of 18- to 24-year-olds. The 25-34 age group was the most likely to agree or strongly agree with the statement that 'lobbying is an essential part of the democratic process' (44 per cent).

The survey showed more people in Northern Ireland understood what lobbying is than anywhere else (56 per cent), while the idea of a register had the most support in Yorkshire and Humber (61 per cent).

I really hope MP Mark Harper takes a look at this given his worries about the scale of public concern about lobbying.

With 73 per cent unaware of the recent lobbying scandals and the survey split on whether lobbying was a growing concern, the survey confirms what we all know - that lobbying gets an 'unfair' press.

The outcome of the Government's consultation on a statutory register of lobbyists must define the act of lobbying if it is going to work. More than half the respondents didn't know what lobbying was or only partly understood it and I fear many of the lobbied would have difficulty.

With 49 per cent of those surveyed thinking the fault of lobbying scandals lies with politicians, Parliament needs to get its house in order. Lobbying is legitimate and a good thing for democracy.

I am heartened that the survey confirms that charities and trade unions do lobby and must be captured by the register if it is to have any credibility.

55% said there should be a statutory lobbying register

44% said they understood what lobbying was 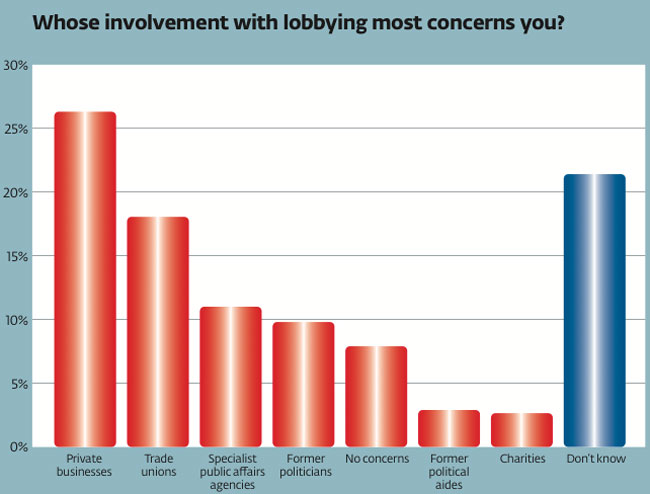