Boris Johnson beats his London mayoral competition when it comes to reputation, but does significantly better among men than women, this week's PRWeek/OnePoll research suggests.

The web-based survey asked Londoners their opinion of the mayoral candidates last week, a month before the 3 May election.

Conservative candidate Johnson came out firmly on top, beating the others for likeability and trustworthiness, among other categories. And it was among men that he was seen most positively, with 40 per cent feeling he had been the best Mayor - five percentage points up on women.

Ken Livingstone was closest to gaining equal favour between the genders when it came to understanding Londoners. Livingstone gained 22 per cent of the vote, five percentage points down on Johnson.

The reputation of the incumbent Tory tended to improve across the range of questions asked as respondents got older. When it came to trusting known names for the role, 70 per cent of those aged over 55 stuck with the two main candidates.

Of the other candidates, Liberal Democrat and former police high-flier Brian Paddick scored best when it came to perceptions of his ability to look after the public purse. The poll also showed Paddick's area of expertise, crime, remained a key area of concern.

When asked what the new Mayor's first priority should be, cutting the crime rate was the most popular among all groups but 18- to 24-year-olds, whose biggest priority was creating jobs.

With nominations closed, the starting gun has fired on the campaign and there's good and bad news in the numbers for all three main candidates.

Boris' team will have most to cheer, with their man well ahead and his ambassadorial qualities of likeability and leadership on the Olympics remaining a hit with Londoners. They'll also be pleased that his record on keeping council tax down and delivering most of his manifesto promises translates into good scores on trustworthiness and handling public money.

A ray of light for Ken's campaign - in figures which will disappoint - is that on the 'bread and butter' issues of transport, crime and affordable homes the Mayor's record is perceived as patchy and his lead much narrower.

For Brian Paddick, it may sound like faint praise that he'll be relieved to be third. But in a contest where he faces a two-party squeeze, the threat from Jenny Jones' active Green campaign is real. 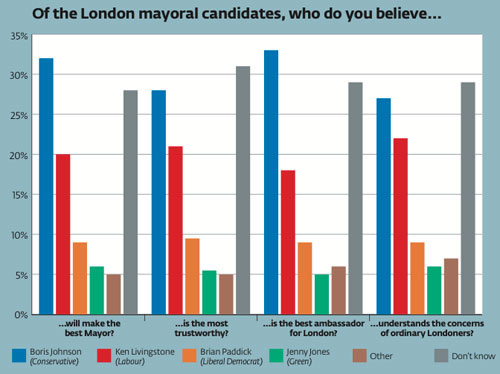