Seventy-nine per cent of consumers do not believe energy prices are cheaper than they were a year ago, the latest survey by PRWeek/OnePoll has revealed. This comes despite price-cut announcements by all of the 'big six' energy firms in the past couple of months, and media stories that these cuts have contributed to a drop in the rate of inflation.

In fact, trust in the big six energy firms does not seem to have grown significantly since PRWeek's last reputation check (4 March 2011) on the sector. This year, 86 per cent of those asked said they did not trust energy providers to pass on any savings they made to customers in the form of price cuts, compared with 90 per cent last year.

Indeed, trust may have declined. Last year, 62 per cent of respondents said energy providers had not done all they could to keep prices low, but the figure this year was 79 per cent. The survey showed a clear correlation between age and opinions. The older a respondent was, the more likely they were to have an opinion on the energy providers, and the more likely it was this opinion would be negative.

British Gas had the best reputation overall, followed by E.On, but 46 per cent were unable to rate one provider over the other.

The results showed an undeniable trust deficit towards the big six. As the utility companies continue to announce strong profits and household energy prices keep changing, this is hardly surprising.

What is striking is the high level of consumer apathy. While 65 per cent of respondents would consider switching providers, Ofgem data revealed only 15 per cent of households switched last year, down from 20 per cent in 2007. With so little differentiation between the big six on price and customer service, consumers are still left indifferent.

This does not bode well for government initiatives, such as smart meters and the Green Deal, which will be partly reliant on the utilities making a case for consumers to trust them. The initial response to Which?'s Big Switch campaign and Energy Secretary Ed Davey's call for trusted organisations in the UK to encourage people to bulk-buy their energy are also warning signs that the utilities surely cannot ignore. 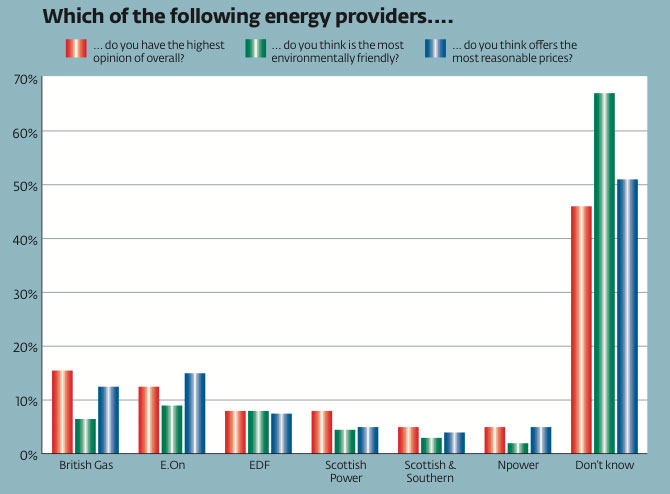 Do you think that your energy bills are cheaper now than they were a
year ago?
Yes: 12
No: 79
No opinion: 9

Do you think energy companies do all they can to keep prices low?
Yes: 8
No: 79
No opinion: 13

Do you think the big six energy companies do all they can to make
pricing easy to understand?
Yes: 10
No: 74
No opinion: 16

Do you trust the big six energy companies to sell you the cheapest deal?
Yes: 8
No: 77
No opinion: 15