Fifty-six per cent agreed there was a direct relationship between how the media reported on the economy and the UK’s economic performance.

MHP Communications chief executive Sacha Des­h­mukh suggested that a crucial reason for the Government failing to create a sense of economic confidence in the media was that, instead of keeping to a consistent set of messages, it is ‘jumping from issue to issue week by week, so we never have a strong sense of the tot­ems in the Government’s economic policy’.

Lansons deputy head of public affairs Chris Bose agreed that the Government’s comms narrative needed to extend wider than deficit reduction and that ‘by forcefully communicating the need to deal with the Budget deficit, Osborne has always looked like he had more of a debt plan than a growth one’.

Despite this, he added that the ‘stubbornly torpid’ economy meant the Government’s growth narrative was ‘always going to be treated with some scepticism’, and that the only way to respond was to ‘point to the goods – economic growth’.

But the media’s tendency to talk down the economy means the Government and Osborne should ‘reach over the heads of the media, direct to people and businesses’, acc­ording to one senior communicator.

Open Road CEO Graham McMillan said: ‘The media will pick up on an economic recovery if there is one. They won’t if there isn’t. It is as simple as that.’

TLG’s research, conducted by Populus among more than 1,000 opinion formers, also found TV continues to have the biggest impact of all media channels, at 51 per cent, although down from 63 per cent last year.

TLG MD Malcolm Gooderham
Traditionally, key to a favourable media was the ability to demonstrate alignment between political and Editorial priorities and opinion leaders. The internet has given us wikipolitics, which means voters are opinion leaders - not just as election times. The parties should be aiming to forge core values connections with middle Britain.

Colin Byrne, EMEA CEO, Weber Shandwick
Media coverage is slightly skewed by the fact most journalists fall into the ’squeezed middle classes’. The Chancellor has to demonstrate social justice while relieving the tax burden on the squeezed middle classes, and to show which bit of the coalition is wearing the trousers on the economy.

Sacha Deshmukh, Chief executive, MHP
The media are just an amplification of a confused Government, so they may amplify the problem, but they haven’t caused it. Until the Government sets out clear steps towards a revitalised enterprise economy, expect the PM and Chancellor to be buffeted by the debate.

47% think bbc.co.uk is the online medium with most influence on business rep

65% think Robert Peston is the most influential commentator

Media influence: The UK media outlets with the biggest impact on business and the economy 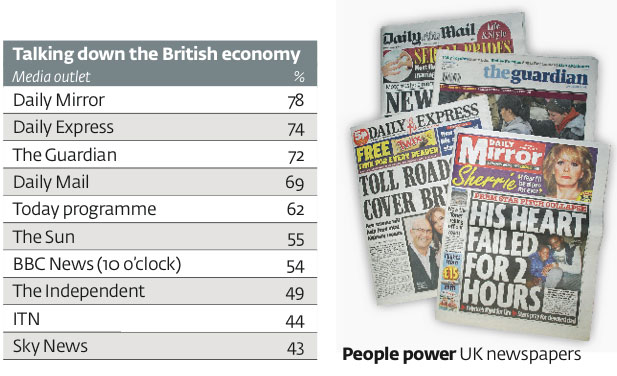 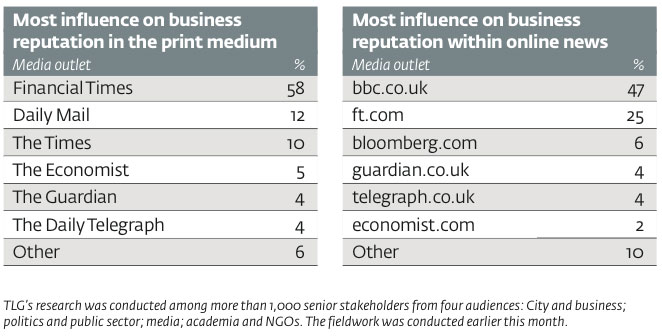