Despite certain coalition gains in trust over the NHS reforms, a deeply sceptical public overwhelmingly believes it must listen more.

A PRWeek/OnePoll survey reveals that just 13 per cent of 2,000 people polled believed enough was being done when it came to consultation for the far-reaching shake-up.

The results emerged after recent criticism of Health Secretary Andrew Lansley over meetings that were seen to have excluded key health bodies. Just 17 per cent believed he should continue to lead the reform.

While 40 per cent said the reforms should be scrapped - more than any other option - it was men who were most definite in their rejection of the plans, with 44 per cent backing the move compared with 37 per cent of women. Forty per cent of the public also felt more negative about the reforms than a year ago.

The responses also suggest the Government needs to focus its key messaging on older generations - resistance to any change increased through the generations, with 30 per cent aged 18 to 24 opposed to the plans compared with 47 per cent aged 55 or older.

Compared with a PRWeek/OnePoll survey on the NHS reforms 12 months ago, the number who distrusted the Government to make decisions to benefit patients dropped by six per cent to 52 per cent.

There was also progress elsewhere, with a drop of two per cent in the number who said the changes would not improve patient care.

Government comms advisers will no doubt take some comfort from the fact the headline numbers - those calling for the reforms to be dropped - aren't getting any worse. After all, in the wake of last week's disastrous implementation summit, one poll showed more than half of voters believed the bill should be scrapped. However, this is likely to be a result of a slight lull in negative media coverage ahead of the return of the bill to the House of Lords this week.

The crux of Lansley's PR problem is revealed in the finding that even now only 17 per cent of the public understands how his reforms will affect the NHS. Far too much of the Government's comms strategy has been focused on highlighting the need for NHS reform in general and too little priority has been given to developing the case for these reforms in particular.

The lack of any compelling narrative has left the public confused and willing to believe the worst about the motives behind the Government's plans. 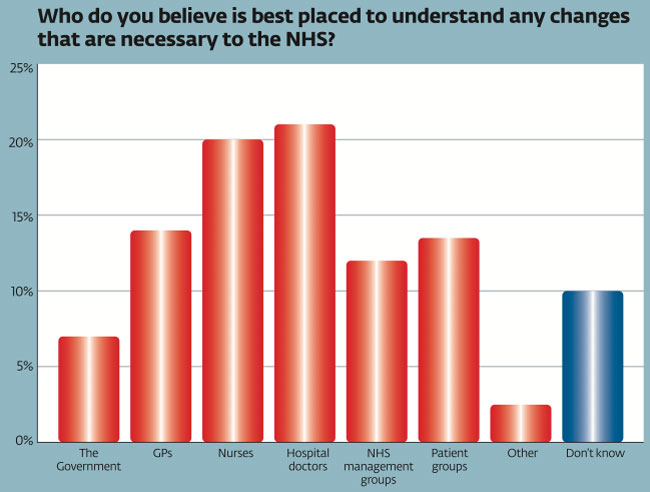