More than half of the general public believes English football has failed to eradicate racism from the game.

A PRWeek/OnePoll survey questioned 2,000 people on the state of 'the beautiful game' in the wake of claims that top Premiership players Luis Suarez and John Terry aimed racist abuse at opponents.

The survey showed that 53 per cent felt racism remained a problem in English football, with only around a quarter of respondents disagreeing.

The findings pose a reputational problem for the Football Association and the Premier League, with the biggest proportion of those asked - 42 per cent - believing that the Respect campaign to create a fair, safe and enjoyable environment for the game had not worked.

A third also suggested Suarez's club Liverpool FC had been too weak in responding to charges he racially abused Manchester United's Patrice Evra, while 35 per cent felt Manchester United had offered the correct response.

Manchester United were top in terms of the overall reputation of Premier League clubs, with 16 per cent of the vote, while Liverpool FC lay at the bottom with five per cent, only just behind Manchester City.

Fans are most likely to be put off by the cost of supporting a team and the role of money in the game, at 24 and 18 per cent respectively. Sponsors should particularly take note that 29 per cent said they would alter their view of an organisation depending upon the actions of the club it backed.

The main insight from this research is an issue surrounding the levels of money associated with football.

Suarez's actions scored a PR own goal for himself, his manager and his club and when incidents such as 'handshake-gate' take place it only reaffirms the perception that footballers are overrated and overpaid for what is often unprofessional conduct.

Salaries in football are not going to be reduced any time soon, so to manage this negative image and change perceptions the FA and clubs need to focus their attentions on the management of player behaviour and the impact this has on the reputation of the sport.

Racism needs to be tackled by clubs, leagues, governing bodies and the Government. The FA's Respect campaign doesn't appear to be having the impact it needs and people want to see stronger consequences for players that break codes of conduct along with more robust comms from the powers that be in football. 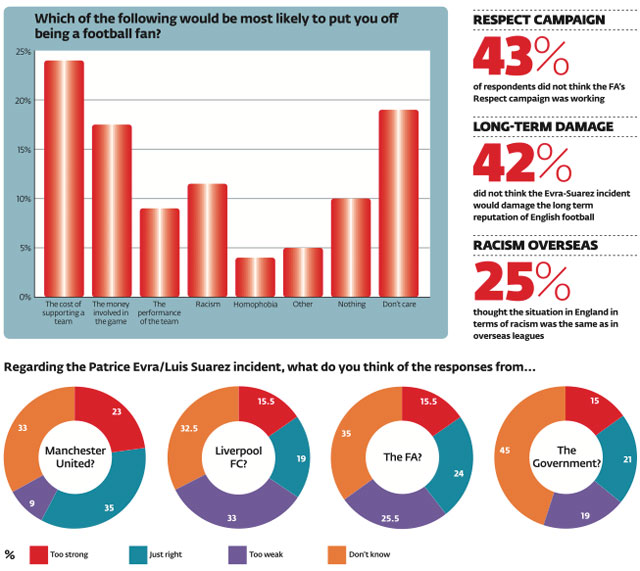