It found that the combined gross income of the 40 consultancies rose by almost five per cent, but agency margins were increasingly squeezed by a rise in employment costs of more than nine per cent during the period. This trend resulted in a widespread decrease in operating profit, with margins plunging to a seven-year low.

Overall combined operating profit fell 12 per cent to £67.4m, compared with £76.3m for the same firms in the previous year. Half of the 40 agencies showed a reduction in operating profit and six even went into the red during the period.

CMGRP UK (the holding company of Weber Shandwick) showed the largest drop in operating profit (-255 per cent), followed by Fleishman-Hillard (-219 per cent) - both, according to the survey, 'attributable to falling revenues largely as a result of the economic climate'.

There is evidence that conditions improved during the year, as the increase in gross income of five per cent reversed the income decline of one per cent recorded last year.

However, the largest income increases were a result of intra-group reorganisations and mergers by companies such as DF King, Grayling and Pelham Bell Pottinger rather than organic growth.

Esther Carder, partner at Kingston Smith W1, commented: 'To enable recovery, PR consultancies need to react proactively to the ever-increasing pressure from clients for more work at lower fees. This needs to be coupled with improved control of costs.'

Within the past month Chime Communications and Huntsworth have announced they both intend to cut costs - a move that is likely to be mirrored across the industry as employment costs rise more quickly than income.

Employment costs climbed by 9.3 per cent and half of the top 40 consultancies continued to increase headcount during the period, resulting in an increase in staff numbers of 3.2 per cent. 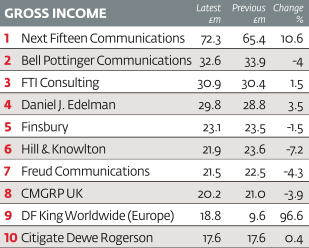 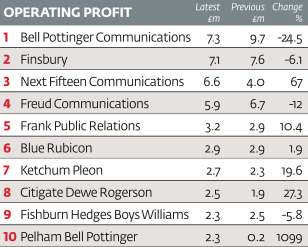 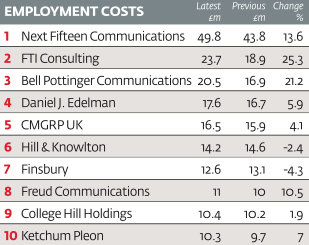