The Kingsnorth Climate Camp in 2009 was a bruising experience for many of those involved - not least E.ON, owner of the Kent power plant that became the focal point of the green lobby's ire.

Back then, its proposal to build a new, larger coal-fired power station on the site of its existing plant was met with outcry from environmental groups concerned about the CO2 emissions associated with this form of power generation.

Ultimately, E.ON shelved its plans after the build became uneconomic but the damage to E.ON's reputation was done.

Given the ferocity of the protests and strength of feelings expressed on both sides, it is surprising how respectful E.ON's head of comms, Guy Esnouf, sounds when talking about his green detractors now.

He even goes so far as to say the company should be 'thankful' to the protesters because they 'made us look at our reputation in a different way'.

'Greenpeace characterised us as the German coal company. Pithy, clear, clever but very unfair. Yes, we are a German company, but that shouldn't matter. What we failed to do was explain why we were looking to build a new coal power station,' says Esnouf, who joined the firm in January 2008, months before the first climate camp.

In May 2009, E.ON began discussions with stakeholders on what it has dubbed its 'trilemma'. It identified three elements to its comms strategy: the environment, energy prices and security of supply.

In any articles about the first two, E.ON - and indeed all energy firms - came out as the bad guys, but in terms of the latter, it was the good guy.

So the strategy was to ensure that balance was represented in more of its media coverage.

'Environmental groups are just that; only interested in the environment, they have no interest in what happens to the fuel poor,' Esnouf explains. 'So we should have started the discussion that we have to balance the three much earlier.

'We couldn't have stopped the protest but we could have explained it much better,' he says. 'What we have realised is that the environmental issue is not the biggest one in terms of our reputation.'

Indeed, tracking from Kingsnorth showed virtually no direct link between what was featured in the media and how customers felt about E.ON.

'Climate camp was a huge event for us but most people when asked weren't aware of it, and if they were most could not say which energy firm it involved,' explains Esnouf.

But that does not stop the groundswell of anti-power company feeling and E.ON, by its own admission, regularly features high in the list of least-trusted companies.

Esnouf's view is that this is less about the big environmental issues and more about the simple, but crucial, matter of customers' bills.

Indeed, soon after PRWeek met Esnouf, E.ON became the fourth of the big six energy suppliers to announce a giant price rise, upping its gas charges by 18.1 per cent and electricity prices by 11.4 per cent for 4.4 million of its five million customers.

'There is a fundamental disconnect between us and our customers over estimated bills. The Government is rolling out smart meters (to 25 million homes over five years) that will end estimated bills. You will actually be paying for what you use,' says Esnouf. 'As energy companies get closer to their customers and data accuracy improves, then we can really address the trust issue.'

He admits that achieving the right tone of voice to talk to its 5.5 million downstream customers took time to get right.

'We created the Talking Energy ads - "Why would an energy company want me to use less energy?" - which goes to the heart of the question,' says Esnouf. 'That was symbolic for us because it kicked off discussions on the social media site Talking Energy.

'We had been to town and village halls holding conversations about energy conservation (Talking Energy Live) with local newspapers, people from the council, Age UK and Energy Action Trust.' 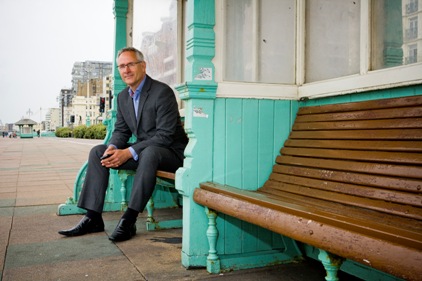 Measurement of corporate reputation is handled using a variety of methods. Esnouf uses Net Promoter Scores to check customer satisfaction, with the results disseminated and acted on company-wide.

This is complemented by analysis of media coverage, social media monitoring and surveys among stakeholder groups and focus groups.

Esnouf is a believer in social media, but only up to a point.

'Social media is a snapshot. It's very unscientific but it's useful, particularly to expose customer problems,' says Esnouf.

'Conversations are always the most important. Most of the investment in social media is to develop the processes and to know what to be able to say.'

As well as maintaining conversations, Esnouf also wants to broaden the debate about energy, conscious that while the environment may have slipped back in stakeholders' minds, it has not gone away.

Esnouf bemoans the current energy system that rewards the cheapest production, when clean and cheap do not always go together.

'If you want a system that rewards the greenest production, then we need to adapt the way the market works and that means money,' he says. 'It's essential to work with the green groups on this. Our long-term objectives are very close.'

'The week I joined, I saw a headline that read "E.ON's reputation problem" - a singular environmental problem. But what we've realised is we have a reputation deficit with our customers that we have to fill,' he explains. 'I want us to behave in a trustworthy way and for us to discover how to talk to our customers in a way that engenders trust.'

This objective has become a check on everything Esnouf's team does. He cites the live events, Talking Energy Live - at eontalkingenergy.com/trilemma/energytalkinglive - as a key part of that strategy.

But this is just one element of his focus on how the company deals with people every day. 'The way the company behaves is more important than what it says,' he adds.

So, his agenda involves various steps, from the installation of smart meters and measures to alleviate fuel poverty, to ways in which it can work with people to help them take up the Government's green deal and energy efficiency measures.

Guy Esnouf's account of what led E.ON to take a fresh look at its UK reputation strategy provides a valuable reminder of some important home truths about effective reputation management.

One is that a company's reputation clearly involves a much broader set of issues than those covered by the media, which can tend to focus on specific incidents rather than more systemic issues.

Esnouf sums up the fundamentals about reputation in his honest portrayal of E.ON learning to listen and improve - the hard way. Importantly, in thanking his environmental detractors, he recognises the opportunity of proper insights driving change. All too often, that is how most organisations come to appreciate the true value of reputation - when they stumble, when it hurts.

The key to managing corporate reputation is to understand what affects a business. Esnouf says the Climate Camp was a huge event for E.ON and news media, but there was little correlation with how customers felt about the business.

I was struck by how much has changed upon seeing the E.ON example of there being no correlation between news coverage and customer opinion on the Kingsnorth issue. A huge corporate activity had been ignored by many of the people who were potentially going to be directly affected. So while Esnouf is absolutely right in trying to balance E.ON's media coverage, it is clear that we are in a new world.

When you have been through the eye of a corporate reputation storm, it's often hard to keep sight of the bigger picture. That's why it's particularly impressive that Esnouf is willing to admit E.ON owes the Kingsnorth Climate Camp a debt of thanks for making it reassess its own reputation.

While media and political stakeholders were very interested in the environment, E.ON's customers were more interested in energy prices. It makes sense that key drivers of corporate reputation are actually the most simple business assets: the quality and price of the product, the service you provide and the way you treat your employees.

Advertisers must do more to address the mental health crisis

Next 15 reports ‘record performance’, is ‘confident’ over M&C Saatchi, says Engine has been ‘successfully integrated’