When PRWeek and the PRCA decided to carry out a census of the UK PR industry, one of the main aims was to generate relevant and up-to-date data about salaries. There is a perception among some - journalists, for example - that PR professionals are extremely well-paid and many a hack has declared that if they ever 'needed the money' they would move into PR. However, among other industries, PR is very much considered the 'poor cousin'.

Until 2008, PRWeek carried out its own salary surveys. But in 2009, the exercise was discontinued because the UK economy was contracting, making asking for information about pay rises an insensitive endeavour when many feared for their jobs.

This year, PRWeek replaced the previous format with the PR Census, a much larger-scale research project carried out by independent market research agency Harris Interactive, which generated more than 1,300 responses.

Additional desk research was carried out and the responses were triangulated with Office for National Statistics and other government data, to produce as accurate a picture of the UK PR industry as possible.

For PR, the pay discrepancy could be explained with the argument that more men than women occupy senior roles in the industry. But, as our graph shows, men out-earn their female counterparts at all levels, from account executive/press officer through to director or head of comms.

At the lower levels, the gap is small. Male account executives earn on average £22,986pa compared with female AEs, who net £21,070. But at board director level (data not shown), men are out-earning women by about £20,000. The same pattern is reflected in-house, with male press officers taking home £32,843 on average compared with their female counterparts' £27,351. By the time we reach comms director level however, men are once again taking home roughly £20,000 more than women.

The pay discrepancy between males and females 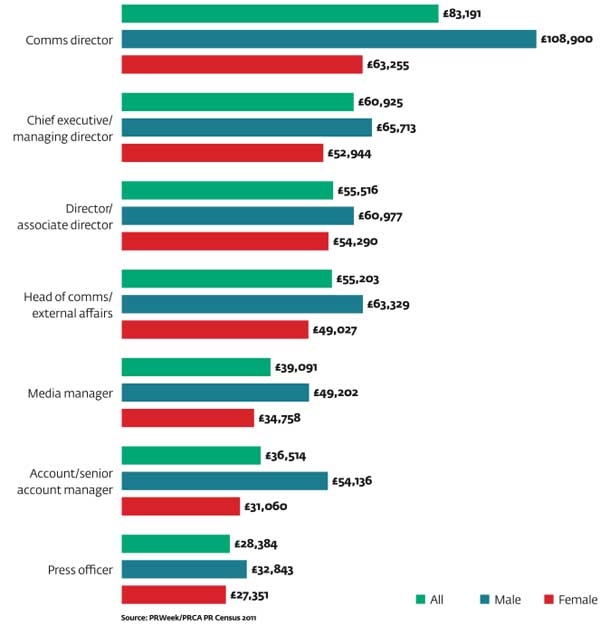 It is not just the UK either. Research by US academic and PRSA member Bey-Ling Sha shows that women in PR earn significantly lower salaries than men across the board. In fact, women earn 78 cents for every dollar men earn, when only base salaries are considered.

'When salaries were adjusted for years of professional experience and roles, women still earned only 87 cents on the dollar earned by men,' Sha says.

There are numerous arguments used to explain the pay gap in the PR industry between men and women - both at home and abroad. Men occupying more senior positions is one possible explanation, and the fact that many women 'drop out' of the PR industry to have children is often cited.

Hamish Thompson, creative director at TwelveThirtyEight, suggests that men may be over-represented in higher-paid sectors of PR such as financial services, whereas women may be more prevalent in consumer and fashion PR, which may not pay as much. But none of these explanations really makes the pay gap 'OK'.

'Our own research shows that women who work full-time are paid on average 15.5 per cent less an hour than men,' says Leigh Daynes, director of comms at charity Plan UK. 'The PR Census is right to shine a light on our industry's failings'.

Fiona Thorne, MD of Fishburn Hedges, adds: 'One of the most alarming findings is that the pattern is so universal, from the most junior posts all the way up. Irrespective of the complex issues around juggling work and family life for many women, it is clear there is some degree of disadvantage built in from the start.'

But Caroline Kinsey, chairman of Cirkle, says that while she is outraged at the discrepancy in salary, she urges caution about the figures 'as they could create a hormonal outcry. The onus is on the individual to ensure they are working in a business where pay reflects contribution and is increased entirely on merit, not gender.'

How salaries have changed

If we compare the Census data with information about salaries gathered in previous PRWeek surveys, we can see how pay has changed (see below). It is important to note, though, that we are not comparing like with like, in terms of sample size and the job titles we asked about. Therefore, these findings should be treated as 'useful to know' as opposed to gospel truth.

It is notable that salaries have not increased a great deal, although the entry-level account executive position has broken the £20,000 barrier.

The recession must be strongly linked to this lack of growth in salaries, as must the cuts in the public sector. In 2008, public sector in-house salaries were very high - now the average in-house public or third sector employee earns around £15,000 less than their private sector counterparts.

Accuracy of the figures 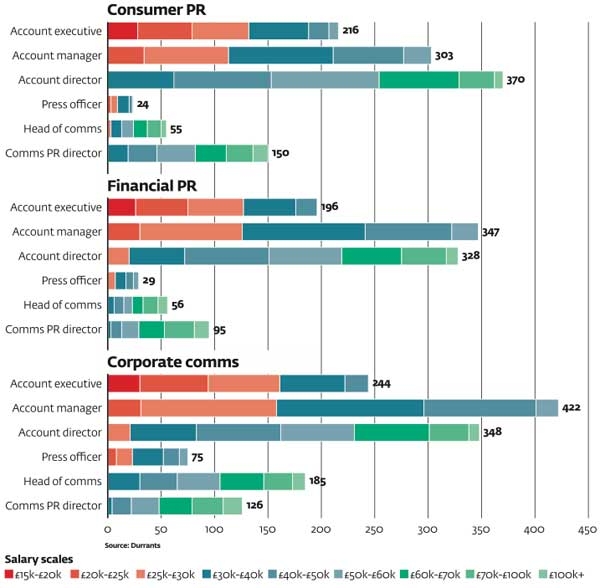 HOW I SEE IT - Christian Destro, Jobs and advertising manager, Gorkana Group

"The salaries advertised on our site correlate with those of the PR Census; in-house PR professionals average £48,000 versus a lower agency average of £46,000. Roles in the finance sector offer higher salaries. In an agency, consumer PROs tend to earn more than corporate PROs, whereas the reverse is true in-house.

During the past six months, we have seen the strongest growth in the consumer and tech PR sectors, with social media specialists in increasingly high demand. We have also noticed an uplift in PR vacancies specifically targeting journalists looking to move into PR - a trend on which we expect to build during the next few years.

One of the biggest determinants in salary levels is the size and type of firm recruiting. Roles have varying degrees of importance in each company and salaries reflect this. In many cases, this means PROs could be earning the same as an account executive or a head of comms. The key thing is that a PRO's salary is totally dependent upon experience, which is why we see such a variance in salary across roles."