When a global consolidation programme brought the Aviva group businesses together under the Aviva name two years ago, we launched into one of the toughest environments the financial services sector had ever witnessed. As the world recovered from the financial crisis, consumer trust in the industry was at an all-time low.

We faced the challenge of integrating dozens of separate systems, identities and product offerings across different countries. But the goal was more than coming together as one business and one global brand. We wanted to demonstrate our commitment to industry leadership, and our belief in doing things differently.

We wanted to create a campaign that was built around a key truth: that we're putting our customers at the heart of everything we do. That's because, as a company, we know insurance is not just about policies and pensions - it is about people.

You Are The Big Picture - launched in October last year - was our first truly global campaign. To demonstrate the scale of our commitment to being more human and more customer-focused, we commissioned giant portraits of our customers, employees, business partners and community members throughout six major cities across the world, wrapping buildings such as Sea Containers House in London and the CNIT building in Paris with these simple, powerful images.

Through print and online advertising, editorial media coverage and our campaign website - youarethebigpicture.com - we revealed the stories behind the pictures, stories that showed how Aviva employees had gone the extra mile for our customers.

Of course, encouraging people to engage with an advertising campaign is harder than ever. So when we asked Blue Rubicon to help transform our core marketing concept into an integrated campaign, it suggested what seemed a small modification, but it became significant. In each of our six cities, it asked us to dedicate one of the You Are The Big Picture buildings to members of the public.

People would be able to upload their photos through the You Are The Big Picture site or our Facebook campaign page and we would project the photos on to a landmark building in one of the campaign cities. The campaign gave thousands of people a chance to have their own moment of recognition - a kind of democratisation through social media.

The idea of inviting the public to contribute directly to a brand campaign might be well established in some industries, but it's relatively bold in the financial services sector. Traditionally, insurance companies have few direct touch points with their customers. Contact typically happens through third parties, every year at renewal, when a claim is filed, or when a pension statement is sent out. Engaging with customers through social media would introduce us to a new type of relationship. An important step in our brand journey, internally and externally.

Linking You Are The Big Picture to Facebook was a natural fit. Our online campaign was based on community-building and the easy sharing of photos and personal experiences afforded us by the platform. As the portraits were unveiled, we capitalised on the moment by using an advertising roadblock to drive 5,000 photo uploads to the site on the first day of the campaign, injecting energy into our emerging community. After that, as the campaign unfolded, we kept our followers engaged through Facebook and Twitter conversations and daily blogs.

To let people watch their moment of fame from anywhere in the world, we partnered with YouTube, creating a simultaneous live projection stream. Video cameras were set up at the sites to capture and broadcast all the projections online in real time across five cities. When participants signed up, they received a personalised video that showed their photo being assembled piece by piece on a city building. When their real-life projection was scheduled, they received an email telling them where and when their portraits would be projected. They could then watch live or on YouTube. Finally, they were sent a photo of their projection moment as a memento of the experience - something that many chose to share with friends on Facebook or Twitter.

To generate buzz and conversation around participation, we targeted audience groups that were likely to take an active interest in photo projections, such as photography enthusiasts, fame seekers and unsung heroes. 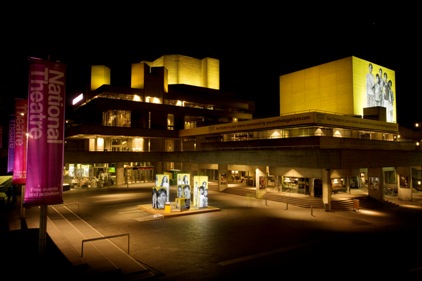 Together with the social media activity, we created real-life experiences near the buildings where the giant photos would be projected. Outside London's National Theatre, for instance, we created a pop-up photography studio, giving people a chance to have their portraits taken by Patric Shaw, the internationally renowned photographer behind the ad campaign, projected on to the theatre and featured in our Facebook gallery.

You Are The Big Picture was a highly ambitious integrated campaign that made social media central to its strategy rather than a tactical delivery mechanism. The campaign was delivered across many online and offline channels, but we always found a way to tie these channels into each other.

People who uploaded pictures to the campaign website could share them on Facebook or Twitter, and comments on the YouTube videos appeared on Facebook. This joined-up approach ensured we captured the maximum value from each interaction. Achieving this level of integration and 'surround sound' meant our agency partners had to work in a joined-up way - often blurring the traditional boundaries between above-the-line and below-the-line thinking and delivery. This was integral to the campaign's success.

Creating a positive two-way interaction was extremely valuable. Although we had to carefully develop a robust moderation and management process that would protect us from the risks of projecting inappropriate content, getting people to participate in a campaign rather than simply observe it was much more powerful.

Setting up this dialogue was one of the ways in which we could show how we are different from our competitors. We discovered that people who shared their photos developed a much stronger and deeper affinity for the brand than we could ever have expected through a one-way campaign. We may have driven public interest through traditional print and broadcast media, but this was a significant change to the traditional PR model for us.

The extraordinary and rewarding journey we went through as an organisation was not only a brand campaign, but an important learning opportunity, embedding organisational change at all levels of our communication. The use of real stories of us at our best has made people proud to work here. Campaign successes have lent confidence to other parts of the organisation to further embrace social media. Everyone now understands that we'll win commercially if we look after our customers.

Increasingly, that's how our customers are seeing things. The big picture really is digital and social - even in financial services. 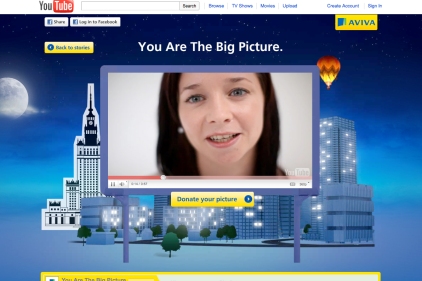 You Are The Big Picture received almost 300 pieces of UK and international media coverage in a six-week period - 96 per cent mentioned the projections and 82 per cent drove readers to youarethebigpicture.com.

The coverage extended far beyond Aviva's sector, and included publications such as Photography Monthly, Confetti.com and Netmums, with many backing the campaign on Twitter and Facebook. For instance, when Closer magazine tweeted about the campaign, clicks increased 20-fold.

We also built on the buzz by approaching key commentators. This generated positive, in-depth reviews in the Financial Times, Metro, Brand Republic and Campaign, and from 14 of the top 100 most influential bloggers, many of whom charted their personal campaign projection journey, from uploading their photo to receiving their shareable video and watching their projection live or on YouTube.

The campaign drove a significant increase in brand consideration, spontaneous awareness and brand perception statements, and there was a strong public response. By the end of our eight-week global campaign, more than 59,000 photos had been uploaded by members of the public, 54,000 of which were projected. Some 1.8 million people visited the campaign's online hub from 160 countries around the world. Aviva previously had no presence on Facebook, but had an active community of 57,000 individuals by the end of the campaign.