The full impact of the recession on financial PR is emerging after a report on agency performance in 2009 from Kingston Smith W1 revealed double-digit revenue drops at most City firms.

The marketing services and media accountancy firm used accounts entered at Companies House to find that gross income declined by 1.4 per cent across the top 40 agencies, but the decline was sharper for City PR firms.

Gross income at the nine agencies in the survey that deal primarily with financial PR dropped by an average of 14.4 per cent, including falls of 22.6 per cent at Maitland and 22.5 per cent at FD.

Overall performance in the sector was boosted by Finsbury, where income declined by only 2.7 per cent. Brunswick, as a partnership, is not required to submit accounts to Companies House.

Income rose by 3.7 per cent among the non-financial PR shops, with jumps of 41 per cent at Bell Pottinger and 34 per cent at Blue Rubicon.

Kingston Smith W1 partner Esther Carder said: 'Financial agencies have been hit by a lack of M&A, but they are also commanding high fees compared with other sectors.'

Financial PR firms continued to lead the tables in terms of income per head. Six of the top ten specialise in City work, with Finsbury topping the table at £326,000 per head, compared with the industry average of £103,000.

'Overall the performance of PR agencies compares favourably to other marketing disciplines, largely because they have a lot of retained income and so it is easier for them to forecast and get staffing levels right,' said Carder. 'PR is also grabbing a larger slice of the pie than other marketing disciplines, particularly in digital and social media.'

Overall headcount was down 1.8 per cent, but staff numbers at many agencies (FD, Weber Shandwick and Hill & Knowlton) fell by more than ten per cent. Staff numbers at Waggener Edstrom Worldwide fell from 84 to 49.

The average operating margin for the top 40 was 14.3 per cent. Kingston Smith W1 said 'a well run' agency should operate with a profit margin of 15-20 per cent.

14.3% - Proportion of agencies that reported profit margins at a four-year low

£14,750 - Operating profit per head - double that of UK marketing groups

I would expect 2010 to have been flat for the good financial agencies, but some will have done better than others. Transaction-based agencies will have suffered the most, but firms with fuzzy identities that operate across several sectors without being strong in any will also have done badly.

Group-owned consultancies tend to be larger, so it's easier for smaller independent agencies to grow. As we come out of recession, we will see improvements in profitability - but those who take social media seriously will do better.

The recession may have been rough on the PR industry  in general, but many agency directors coped with the downturn rather better.

The pay of the top ten highest earning directors rose by 3.9 per cent in 2009, Kingston Smith W1's data shows. This rise was driven by WPP-owned Finsbury, which paid its top earning director, thought to be founder Roland Rudd, £3.1m during the year.

There were also big pay increases at Grayling after its merger with Mmd and Trimedia. The top director's pay almost trebled.

The Big Partnership, just outside the top ten list, handed its highest earning director a 160 per cent rise, to £346,000.

Pay for all directors across the top 40 agencies fell by 7.6 per cent, with drops of over 20 per cent at Edelman, Ketchum Pleon, Maitland and Mandate.

Employment costs per head rose marginally to £61,660, despite a drop in operating profits of 14.7 per cent for the top 40 consultancies. 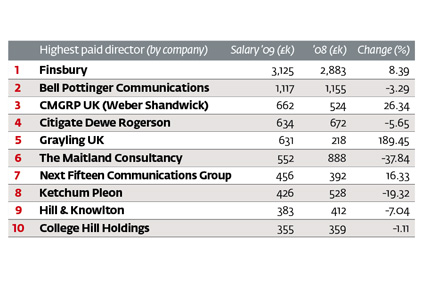