In a groundbreaking transparency move, the Government has published all Whitehall spending of more than £25,000 between May and September. A trawl through the data reveals that some £1.98m was spent on PR agencies in this period.

But with the Government's marketing freeze now under way, the data also makes clear just how much cash has been lost by some of the leading public sector agencies, with monthly spend in September £112,239 compared with £262,744 back in May.

The leading beneficiary has been Freud Communications for the Department of Health's (DH's) Change4Life anti-obesity account. According to the figures released, this work has brought in monthly fees of between £40,000 and £45,000 via the Central Office of Information (COI).

The DH has revealed that the Change4Life brief will continue until at least next March, with fees expected to stay at £40,000 a month.

A DH spokesman justified the continued expenditure: 'Following rigorous evaluation, we know that Change4Life has been highly successful. For example, we know that nearly half a million families are part of the movement and more than a million mums say they have changed their behaviour as a result of it.

'As an example of value for money for PR activity, a recent Change4Life PR-led initiative generated coverage worth more than £1,221,964 in just a few days.'

Not all agencies have maintained their contracts. The only agencies to be paid in September were Freuds, Grayling and The Forster Company, while agencies including The Red Consultancy, Band & Brown and Blue Rubicon all saw payments tail off. In particular, Red was hit by the loss of its 'Catch it, Bin it, Kill it' campaign for the DH.

Red MD Amanda Duncan said that most of its Government work was 'cut overnight' as soon as the new administration was announced. She added: 'There was a period when a lot of work was going on in Government comms and I'm optimistic it will come back - I just doubt this will be any time soon.'

A Central Office of Information spokeswoman said: ‘Government advertising and marketing spend was frozen in June to help drive through the £6.2bn efficiency savings the Government pledged to deliver this year. Only the most essential campaigns are continuing because we need to ensure that taxpayers’ money is being used where it will make the most difference.

‘In August it was announced that spend was down 52% on the previous year and this trend has continued. The date associated with each item of spend on the data COI has published, relates to when the payment was made - not when the activity took place. This means the data includes spend committed to before the advertising and marketing freeze.’

Since the marketing freeze, there have been no other briefs from the COI. There has been some work from departments direct. Once the Government identifies its comms needs, there will be opportunities for PR (but) I don't think this Government will spend as much on PR as the previous administration.

It's fair to say the Government has cut back on all our public sector contracts - and there is very little coming from the COI. I don't think this is going to change for the foreseeable future, but I think it's right the Government is investigating its PR spend to create more value. 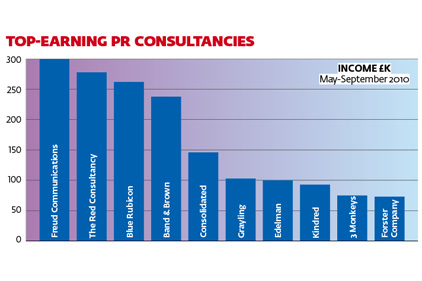 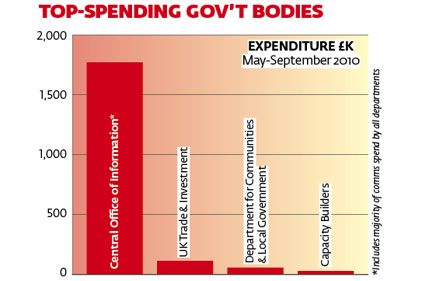