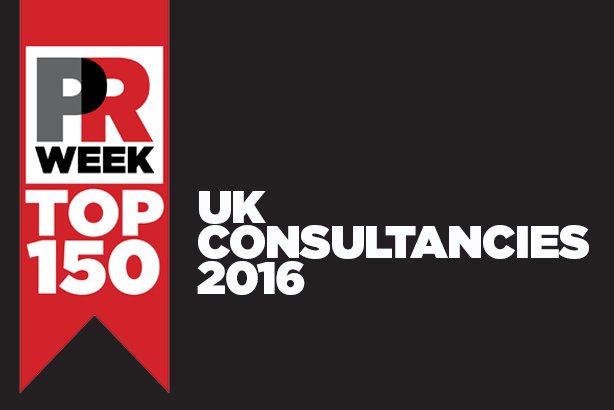 Revenue for the UK PR industry rose again in during 2015, although many of the bigger players were outperformed by smaller agencies in terms of growth rates.

From the editor-in-chief: PR has rarely looked this good a place to invest or work

Having developed further its scope and depth this year, PRWeek's Agency Business Report (ABR) is easily the most comprehensive report on the PR industry, both in the UK and worldwide.

Revenue is defined as the sum of fee income for public relations counselling. Revenue does not include advertising spend on behalf of clients or out-of-pocket rebillable charges. Figures from 1 January to 31 December 2015, rounded to nearest £1,000.

***SERMO was originally included in the list but is not a UK PR agency. Talk PR is the UK trading arm of SERMO.

RE – Re-entry: agency has previously featured in Top 150, but was not included last year

6 Havas PR's revenue and staff figures include those for Maitland, HSE Cake and Just::Health

13 Due to amendments made to UK revenue generated, Ruder Finn has been moved up from 121 to 60

16 Only 2015 revenue for MWW is an estimate. 2014 revenue and both years' staff numbers provided by the agency

18 Last year's revenue for Dynamo Communications – £1,149,000 - has been restated because it included rebillables.